Sir Walter Ralegh (spelled as he would) was a strong supporter of the legend of El Dorado – that a king covered in gold lived in a magnificent city by the side of Lake Parime.

The idea originated in the 1540s among gold adventurers and was the basis for countless expeditions during the latter 1500s. Some adventurers claimed to have found “El Dorado” including Juan Martin de Albujar who located Manoa and El Dorado in the Guiana Highlands – the Pakaraima Mountains – between the Amazon and Orinoco Rivers. Sir Walter Ralegh – Britain’s great adventurer – heard the story from Don Antonio de Berrio and Ralegh’s second in command, Lawrence Keymis, determined after discussions with Amerindians that El Dorado could be reached by travelling up the Essequibo River.

Ralegh supported four voyages to the Guianas in 1579, 1595, 1596, and 1617 and went personally on the 1579 and 1617 journeys. During the 1617 trip, Ralegh’s son Wat died on the Orinoco River and Ralegh’s own health declined substantially. Interestingly, nearly all of the earliest maps of the Guianas seem to be derived from Ralegh’s perspective and included Lake Parime and the links between the Essequibo River and the Lake – including the Hondius map of 1599, the Jansson map of 1647, and a Vellum map now in the British Library [17940a]. Maps continued to place Lake Parime in the Guianas for over 150 years until Humboldt finally explained, and consequently dispelled, the myth.

Neither the great lake nor El Dorado was ever found. However, in the 1800s two people linked the North Rupununi to the legend of El Dorado. Alexander Humboldt considered that Lake Amucu in the North Rupununi, which had been described by a Dutch trader called Nicholas Horstmann, was the Lake Parime of Ralegh and Keymis. Horstmann had sketched the area and this sketch had passed to a Frenchman Charles-Marie de La Condamine who had then passed the sketch to the French geographer Jean-Baptiste d’Anville who incorporated the sketch into his Carte de l’Amerique Meridionale in 1748. Humboldt indicated that Lake Amucu was in the same location as the purported Lake Parime or Roponowini described to Keymis and was also a “large inland sea” when flooded and noted that all fables have some real foundation. Interestingly, Charles Waterton independently came to a similar conclusion and proposed that the Rupununi could be the famed Lake Parime. 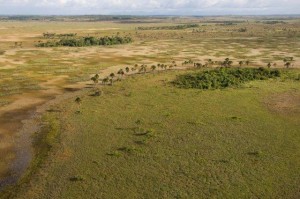 Subsequently, Robert Schomburgk – a protégé of Humboldt – visited Pirara on the edge of Lake Amucu. He noted that this area of flooded Rupununi which linked the Amazon and Essequibo drainages was most likely to be the Lake Parime of Keymis and Ralegh as predicted by Humboldt. Subsequently, additional linkages have been forged – for example Manaus is named after the Manoa tribe of the Rio Negro. It has been argued that locating Lake Amucu as Ralegh’s El Dorado in British Guiana made this area eminently British and placed Guiana as the centre of the British Empire in the 1840s.