There are few laws regulating commercial fishing in the Rupununi. However, the new community driven Arapaima Management Plan is beginning to bring order to commercial fishing. Additional species are now under threat as the Rupununi becomes more accessible to fishermen from Georgetown and Roraima. 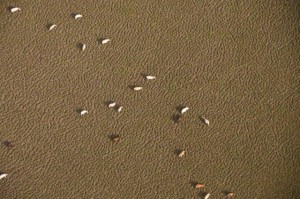 Large scale agriculture and sensitive wetlands tend to be mutually exclusive. The irrigation and chemical requirements for large scale intensive agriculture tend to place wetlands at substantial risk. The difficulty of linking conservation and this kind of agricultural development is evidenced by the conflicts created in famous wetlands such as the Florida Everglades. 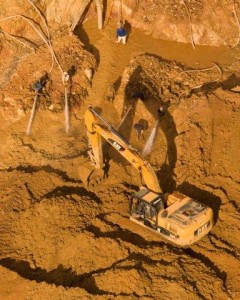 Gold is a very important element in the Guyana economy. Unfortunately, mining also has numerous negative ecological consequences. These include river and land dredges modifying river bed paths and causing siltation downriver. Siltation and increased turbidity can affect the breeding behaviour of fish.

In addition, gold mining often uses mercury in the extraction process. The incorrect use of mercury can increase the risk of environmental contamination and also is a major risk for miners. Mercury can be bioaccumulated through food chains in top predators such as Arapaima and Giant River Otters.

Economic activities are obviously critical for the development of Guyana. However, in highly sensitive wetland areas, extra special care in planning is required to minimize environmental risks.

It would be a terrible destiny for Guyana were the extraordinary Rupununi wetlands to be lost to large scale intensive agriculture, mining, and resource overharvests; particularly when an integrated management approach can provide for both sustainable development and conservation.